One of the best ways to test your mobile app is on the device. This is a must if your app uses native (PhoneGap) API such as the Camera or the Barcode scanner. Installing the app on the device after every small update is very time consuming. That’s exactly why we built the Appery.io Tester app. It’s a very simple app that allows you to launch your native app and test any native APIs without needing to install it each time. We had the Android version for some time now and now we have also launched the iOS version.

Install the app on your device:

Once the app is installed, sign in with the same credentials as you use for http://appery.io and you will see a list of all your apps. Simply select the app you want to launch and start testing! This allows you quicly to test any native APIs used in the app. If you make any changes to the app (in Appery.io builder), simply relaunch the app to get the latest version. It’s that simple. 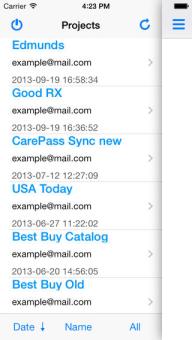