Active developers vs. awareness events, an approach we are trying

If you are in Developer Relations space then hosting and speaking at events is probably a big part of your job.

There are of many type of events that developers go to: meetups, workshops, conferences, online meetups/webinars, Lunch & Learn events, panels and others.

Metrics is the holy grail in Developer Relations. One type of a metric that many companies track is the number of active developers on their platform. Similar metrics can be number of apps created, number services created, etc.

One metric for us is a number of active developers on the IBM Cloud platform. As you can image, that’s a metric for the larger Developer Advocacy organization at IBM and also company-wide. So we got a lot of help.

What is an active developer? Every company can define it differently but usually it’s a developer who registered for a cloud account and created a service (there is also a time window when the developer has to be active).

First, how do we actually track active developers? It’s pretty simple and my guess most other organizations use a similar approach. We use a special link with tracking information.

So we are updating our approach. Events like a conference talk, a meetup talk(lecture-style), online meetup or a lightning talk we now consider as awareness events. These are events where developers will learn about technology and solutions. We always share resources how to get started and where developers can learn more and how to reach us for help. For example, IBM Developer has a trove of Code Patterns. A Code Pattern is a 360-degree view of an underlying solution including architecture diagram, code on GitHub, tutorial and a video.

I know that some companies use a special code/promo code which they can track to a specific event and track active developers this way. This is a good approach of course. It’s also possible developers will sign up for a service but without using the code. Developers can easily forget to use the special link given at a talk after attending numerous talks at a conference. You still get an active developer (which is obviously a good think) but you won’t be able to track it to a specific event.

For active developers, we host hands-on workshops. These are events where we ask developers to bring their laptops and will code a solution together. In our hands-on workshops, developer will build a solution using many of the services on the IBM Cloud. I believe this is one of the best ways to learn. We help developers get started. If they liked what they saw and it solves a problem, they can take it back to their work and continue working on it.

Awareness is not any less important than active developers. We encourage developers to join our meetup and come to our hands-on workshops where they can get high-quality hands-on developer education. 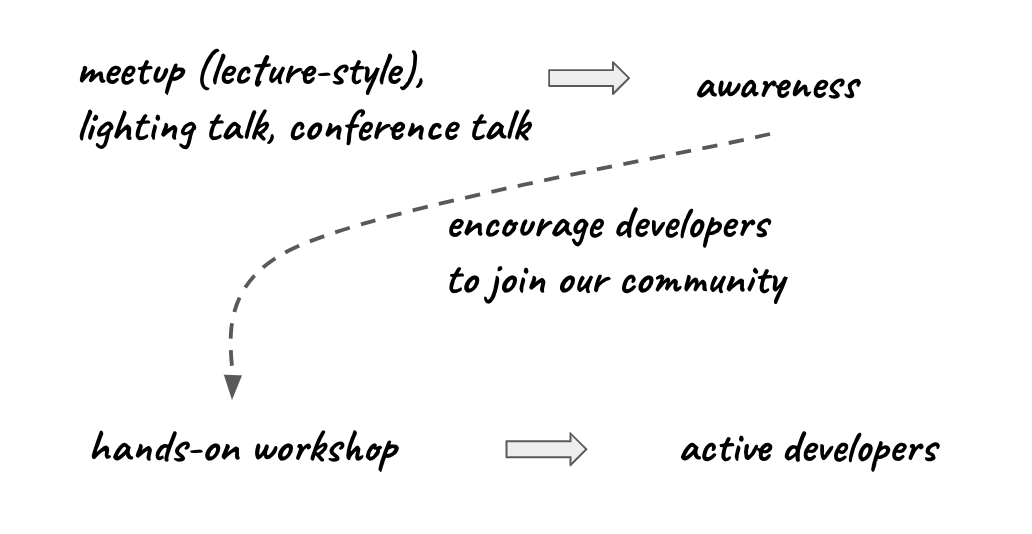 This approach also helps with expectations. Before, we expected a significant number of active developers from awareness type events. And we will still get some new active developers but this number will probably be small. And that’s fine – we won’t expect a big number. For example, if we host an online meetup with 80 people and track single digit active developers – that will be expected.

There is no right or wrong way to do this – as with almost everything in the Developer Relations space. This an approach we are trying. Would love to hear your thoughts. Once we have more data, I will publish an update to this blog post.

5 responses to “Active developers vs. awareness events, an approach we are trying”